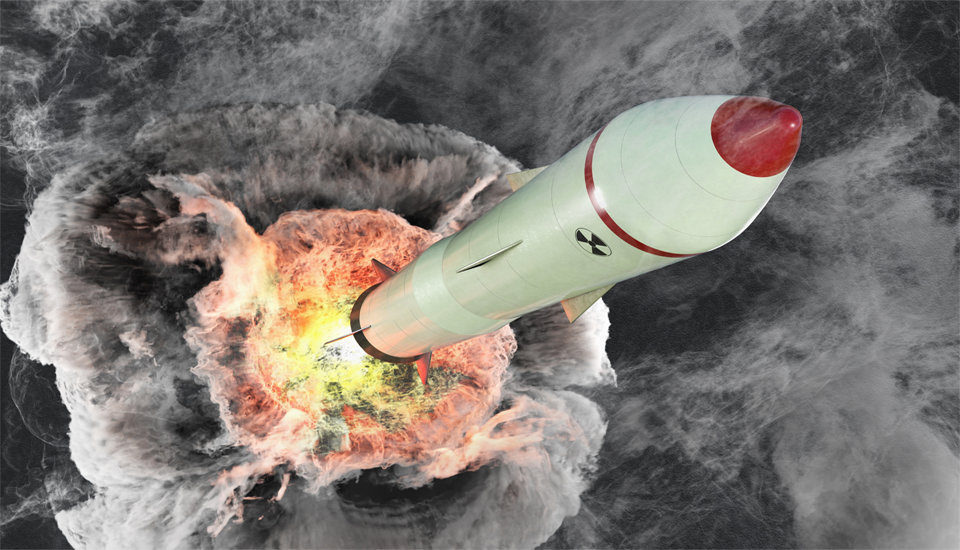 While North Korea has made strong rhetoric claims about the use of its nuclear weapons in the past, the new law has now stipulated flexible conditions for nuclear weapons usage including automatic (such as outlined by Article 3) or first use of nuclear weapons, even against non-nuclear attacks. Dr. Bee Yun Jo, Research Fellow at Korea Institute for Defense Analyses (KIDA) is uncertain whether the law is underpinned by a preemptive or defensive intent, but she believes the new law comes off as a bluntly offensive doctrine.

Dr. Jo notes that the doctrine has enhanced the implementation capability of nuclear weapons, as not only does Article 3 transfer nuclear authority from the Supreme Commander of the Korean People’s Army to the President of State Affairs, but the law also institutionalizes a supporting advisory organization. Jo summarizes that this indicates a tangible advancement of North Korea’s nuclear programs at the tactical and operational levels. She believes the legislature marks a significant change, as it makes possession of nuclear weapons a fait accompli and that the law displays Pyongyang’s willingness to utilize tactical nuclear weapons. Lastly, she states that the prevalence of discourse concerning nuclear usage and the threats Pyongyang posed to Seoul and its allies, has lowered the nuclear taboo and threshold, marking a departure from previous instances.

Dr. Wongon Park, Professor at Ewha Womans University, argues that the extensive conditions which enable nuclear weapons use, such as for a preventative strike or a situation that “threatens the people’s lives and safety,” are intentionally designed to maintain strategic ambiguity to up the ante for negotiations. Professor Park likens this to Kim Jong-un’s April speech during a military parade, in which he stated that the North will use nuclear weapons even in non-military situations which infringe on the national interest. He believes that as North Korea has limited its own options by cutting off its retreat when it mandates that it would not give up its nuclear weapons, it has positioned itself in an advantageous position for future talks on denuclearization.

In light of Pyongyang’s hardline hostile attitude, Dr. Park assumes that Kim Jong-un wishes to enshrine his achievements to further consolidate his political legitimacy. He takes note of how Kim Jong-un brought up the concept of chongdae philosophy (Arms philosophy), which takes after the legacy of Kim Il-sung’s guerilla warfare against the Japanese occupation of Korea with only two guns. As Kim Jong-un likens the Hwasong 17 and Hwasong 15 ICBMs with the two guns of his grandfather, it seems that he aims to establish the nuclear program as an equally great achievement.

Ⅱ. South Korea’s Position of Policy with regard to the New Development

Dr. Bee Yun Jo notes that the Yoon administration’s Audacious Initiative seeks to bring North Korea back to dialogue by placing more emphasis on deterrence and defense than dialogues and persuasion. She highlights that the release of the plan was timely since it reaffirmed the government’s position and sent a signal that any military provocations and nuclear developments are not acceptable. Regarding critique on whether this initiative is a repeated version of president Lee Myung-bak’s policy, she claims that there are subtle differences, especially on the deterrence emphasis. In terms of North Korean policy, she elaborates on South Korea’s “three-axis” defense system that consists of Korea Massive Punishment and Retaliation (KMPR), an operational plan to incapacitate the North Korean leadership in a major conflict; the Kill Chain pre-emptive strike platform; and the Korea Air and Missile Defense System (KAMD).

Professor Won Gon Park examines North Korea’s demands for a total withdrawal of the hostile policy toward it. Although North Korea already knows that the United States could not accept this demand, it simply wants to have some justification for continuing to develop its nuclear weapons. As Pyongyang test-fired short-range, medium-range missiles, and even ICBMs and officially discarded the moratorium they promised in April 2018, Dr. Park predicts that North Korea will keep a hardline stance to pursue its ultimate goal of becoming a de-facto nuclear-weapon state.

Regarding President Yoon’s Audacious Plan, Dr. Park states that the plan has a fundamental limit, as it seems North Korea would not give up its nuclear weapons with an economic incentive. Meanwhile, he reiterates that at least two principles which the audacious initiative has introduced are very meaningful, including South Korea’s role as the main actor in dealing with the North Korean nuclear issues and a clear definition for the final goal of North Korea’s denuclearization.

Ⅲ. Path for a Denuclearization of North Korea

Professor Won Gon Park notes that the North Korean nuclear issue can’t be resolved without the United States and China’s cooperation. In the situation that the two countries’ rivalry intensifies due to the strains imposed by their own respective domestic problems, Dr. Park foresees that the North Korean issue will likely not be their highest priority. Although the Biden administration offered 60 million doses of vaccine to North Korea last year, North Korea eventually refused the vaccine and simply launched the missiles starting this year, whilst not signaling any desire to resume dialogue with the United States. Meanwhile, as China keeps calling for addressing North Korea’s legitimate concerns and vetoed a U.S.-drafted United Nations Security Council resolution to strengthen sanctions on North Korea, he argues that this enables North Korea’s provocative actions for its own gains.

Dr. Bee Yun Jo indicates that maintaining a competitive edge over China and constraining Russia and Iran are priorities for the U.S., making North Korea no longer its top policy priority. She stresses that this makes South Kora’s role ever more important for the denuclearization of North Korea. Given that Russia’s nuclear weapons are not enough to stop continued Western support for Ukraine, she mentions that this has reminded North Korea that nuclear weapons are not a panacea. However, as it seems North Korea will not likely give up its nuclear weapons soon, she suggests that South Korea should develop a new agenda for denuclearization and embrace a more expansive role in the international community on North Korean issues.

Ⅳ. United States Attitude and the Perception of the North Korean Issue

Getting North Korea Back to the Table

While Washington is heavily focusing on dealing with China and Russia, Dr. John Park emphasizes the United States’ firm commitment to defend its allies in the region while exploring diplomacy and its readiness for dialogue with North Korea.

To make progress on North Korea’s denuclearization, Dr. Park mentions that the freezing of missile testing would be an ideal starting point to at least slow down the rapid escalation of tensions. Due to North Korea’s policy of shutting down border access because of COVID-19, the North Korean economy remains weak and vulnerable. As Xi Jinping and Kim Jong-un envision means of economic engagement, Dr. Park clarifies that a certain type of environment and situation is needed for North Korea to allow robust access to the Chinese marketplace. He suggests that this could serve as a catalyst to initiate and sustain the disarmament process.

■ Bee Yun Jo_is Associate Research Fellow at the Center for Security and Strategy (defense strategy division), Korea Institute for Defense Analyses (KIDA). Before joining KIDA in 2020, she was a Research Professor at the Institute of International Affairs(IIA), Seoul National University, and a full-time lecturer at East Asia International College(EIC), Yonsei University. Her research focuses on South Korea’s deterrence and defense strategy, particularly on ROK-US extended deterrence, US’s nuclear strategy, and alliance and armament in Northeast Asia. Her current research focuses on NATO’s nuclear sharing and possibilities for the Asian version of nuclear sharing. Her publications also appear in Asian Perspective, International Relations of the Asia-Pacific, Korean Social Science Journal, Korean Journal of Security Affairs, and others. She is an advisory committee member of ROK Ministry of Foreign Affairs, Department of Arms Control and Nonproliferation, and ROK Joint Chiefs of Staff, Nuclear and WMD Response Center. She is also a member of the planning board of the Korean Association for Political and Diplomatic History and an advisory committee member of the National Unification Advisory Council.

■ John Park_ is a Director of the Korea Project at the Harvard Kennedy School’s Belfer Center for Science and International Affairs. His core research projects focus on deterrence, economic statecraft, nuclear proliferation, Asian alliances, and North Korean cyber operations.At Harvard University, he is an Associated Faculty Member of the Korea Institute, Faculty Member of the Committee on Regional Studies East Asia, and a Faculty Affiliate with the Project on Managing the Atom. He also directed Northeast Asia Track 1.5 dialogues at the U.S. Institute of Peace in Washington, D.C. He advises Northeast Asia policy-focused officials in the U.S. government. Earlier, Dr. Park worked at Goldman Sachs and The Boston Consulting Group. He is a commentator on Asian geopolitical issues on CNN, BBC, CNBC, and Bloomberg TV. He also advises institutional investors on geopolitical risk in Asia-Pacific markets.

■ Won Gon Park_is a Professor in the Department of North Korean Studies at Ewha Womans University. He received his Ph.D. from the Department of International Relations at Seoul National University. He studied the ROK-U.S. alliance and North Korea for 18 years at the Korea Institute for Defense Analyses. He has previously served as a professor of international studies at Handong Global University. Currently, he is a member of the Policy Advisory Committee of the Korean Ministry of Foreign Affairs. His primary research areas include the ROK-U.S. alliance, North Korean diplomacy and military affairs, and international relations in Northeast Asia.

■ Seongho Sheen_ is a Professor of International Security and East Asia, and former Dean for Office of International Affairs in SNU. Professor Sheen was a visiting fellow at the East-West Center DC, a CNAPS fellow at the Brookings Institution, an assistant research professor at Asia-Pacific Center for Security Studies (APCSS), Honolulu, Hawaii and a research fellow at Institute for Foreign Policy Analysis (IFPA), Cambridge, Mass, the U.S. He has taught at Univ. Mass Boston. In addition, he advised various government organizations including ROK National Ministry of Defense, Ministry of Foreign Affairs, Ministry of Unification and Committee on Foreign Affairs and Unification, the ROK National Assembly. His area of interest includes International Security, US Foreign Policy, Northeast Asian Politics and the Korean Peninsula. Professor Sheen received his Ph.D. and M.A. from the Fletcher School of Law and Diplomacy, Tufts University and his B.A. from Seoul National University.