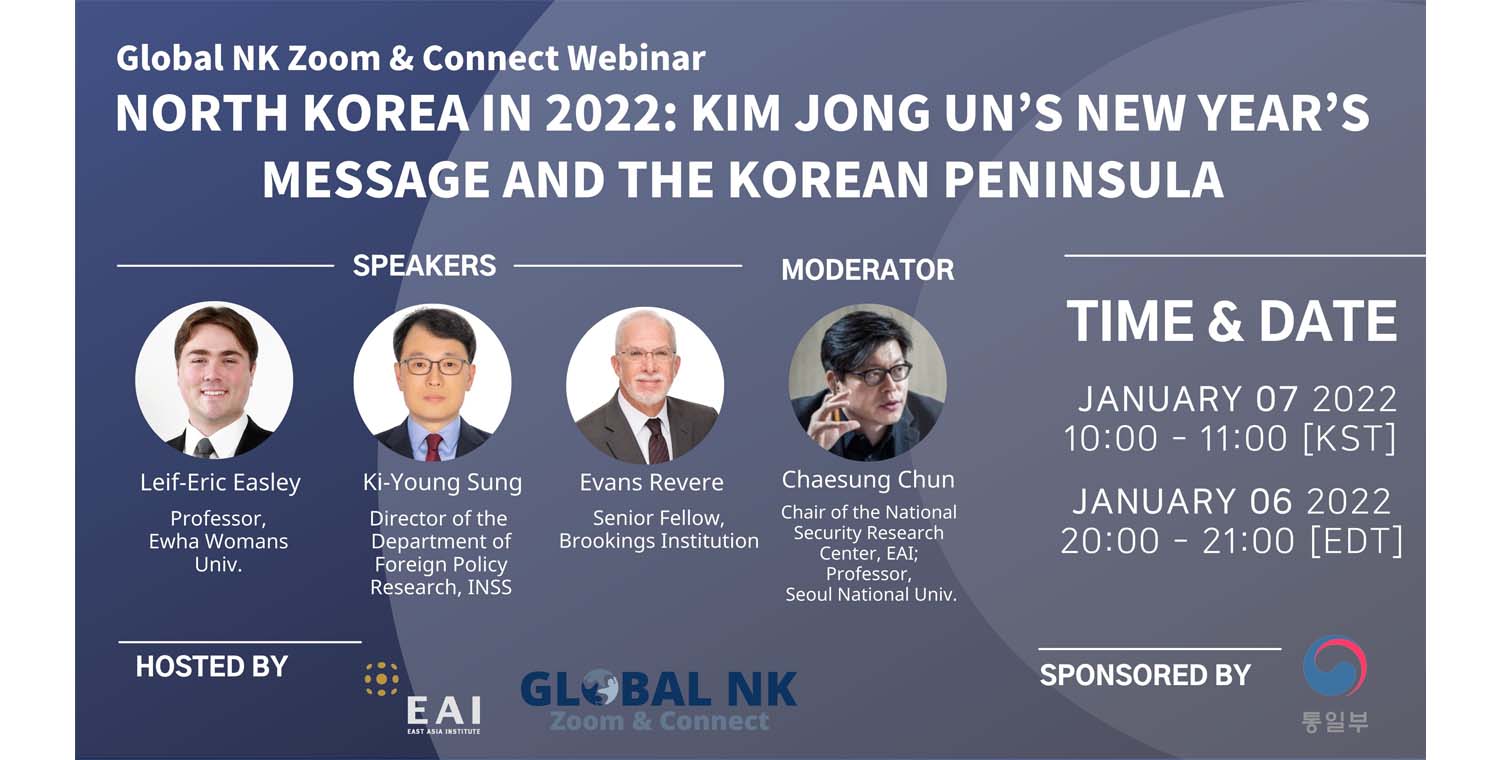 As part of the Global NK Zoom & Connect project, the East Asia Institute (President Yul Sohn) held “North Korea in 2022: Kim Jong Un’s New Year’s Message and the Korean Peninsula." This webinar analyzed and forecasted North Korea's strategy in 2022 based on New Years' messages from the plenary meeting of the central committee of North Korean Workers' Party and Kim Jong Un. Experts from the United States and South Korea discussed issues concerning the Korean Peninsula including inter-Korean relations, denuclearization, and prospective North Korea policy to be initiated by the next South Korean government and talked about ways to realize a peaceful and prosperous Korean Peninsula and facilitate successful peace-denuclearization talks.

I. The 4th Plenary Meeting of the 8th Central Committee of the Workers’ Party of Korea

According to Dr. Ki-Young Sung, Director of the Department of Foreign Policy Research at the Institute for National Security Strategy (INSS), states that the key priority for this year's plenary meeting was the revival of the North Korean economy. This comes as no surprise, given that North Korea’s GDP fell by 4.5% in 2020, which is the second largest drop recorded in history.

Dr. Leif-Eric Easley, Professor at Ewha Womans University, notes that worsened economic conditions due to border lockdowns are likely to have especially affected the livelihood of women. Women are reported to have a significant, yet unrecognized role in the North Korean economy; they are known to be actively involved in informal trade, essential to the imports of household and other goods. He views that the COVID-19 pandemic has significantly curtailed women’s opportunities of entrepreneurialism and market activity.

Contrary to assumptions that the regime would introduce bold, dramatic plans to reinvigorate the economy, none of such were suggested. However, Dr. Sung adds that the dire state of the economy is likely to affect the political foundation of leadership in North Korea. For instance, he notes that the leadership has been tackling subpar economic performance with the idolization of the leadership. State media have recently referred to Kim Jong Un as suryong, a term only used for Kim Il Sung and Kim Jong Il.

Dr. Easley also notes that the Worker's Party's policy ideas were "uninspiring.” He points out that although Kim Jong Un is willing to manifest his ambitions for economic growth, his clampdown on informal markets pursuit of juche self-reliance has failed to distance himself from the failures of his predecessors.

Mr. Evans Revere, Senior Fellow at Brookings Institution, also deduces that North Korea is suffering economically and agriculturally from the plenum but further notes that "our ability to understand the actual depth of its current crisis … is very limited by the way that the regime reported the Korea Workers’ Party Plenum.” In particular, he notes that while Kim Jong Un’s remarks were referenced in North Korean official media, no actual text of his statement was released. He raises the possibility that much has been left unreported regarding the full extent of North Korea's difficulties. Furthermore, Mr. Revere claims he finds it “incomprehensible that Kim did not dwell on foreign affairs, relations with the U.S., defense and security matters, including the nuclear and missile programs, North-South relations, and ties with China in his remarks at the plenum.” The absence of reporting should not be interpreted as the absence of content.

Mr. Revere states that while North Korea is aware that renewed nuclear weapons and long-range ballistic missile testing would anger China and push the U.S. to adopt harsh measures, it has a record of defying what we perceive to be in its best interest. Although North Korea should find ways to alleviate pressures from sanctions and maintain good ties with China, it remains firm in its belief that it can simultaneously own weapons and obtain sanctions relief. Dr. Sung sees that North Korea would be unwilling to resume dialogue with the U.S. unless it renders the resumption of talks with the U.S. or South Korea helpful in achieving domestic stability or consolidating Kim Jong Un's power. Additionally, the air of uncertainty in South Korea regarding the presidential elections and U.S. midterm elections will keep North Korea in a "wait-and-see” position.

The Role of the U.S and Allies in Accelerating Progress

Dr. Easley views that North Korea is likely to push ahead with its military modernization and resume weapons testing in 2022. Bringing North Korea to denuclearize would not only require a unity of purpose among the U.S., South Korea, and Japan, but also a more cooperative China and pressures inside North Korea for political-economic reform. However, the Biden administration does not seem keen to place North Korea on top of its priority list as of now. Mr. Revere points out that given relations with China and Russia, the internal political situation in the U.S., and the pandemic, the Biden administration will remain in a “wait-and-see” posture in the absence of a major provocation by North Korea. While progress on the road toward denuclearization seems limited, Dr. Easley emphasizes that “Washington, Seoul, and Tokyo are capable of managing the North Korea threat by increasing security cooperation for deterrence, reinvigorating international sanctions while granting sanctions for aid and expanding multilateral pressure on both Pyongyang and Beijing.” It should, however, also be noted that North Korea has a tendency to reject UN assistance. Dr. Easley explains that this is due to three reasons. One is concerns over virus transmission – novel viruses pose a serious threat to survival in a country devoid of adequate medical infrastructure. Additionally, North Korea does not appear to be convinced that vaccine rollout would serve as an antidote to the pandemic. Furthermore, North Korea’s concern over regime legitimacy overrides practical concerns for healthcare.

III. North Korea in the Context of U.S.-China Strategic Competition

The Implications of U.S.-China Strategic Competition

According to Mr. Revere, the U.S aims to push back against China's aggressive approach in East Asia, deal with China's attempts to intimidate its neighbors, and respond to China's desire to become the dominant actor. While other major international actors are aligning themselves with the U.S., China seems to have accepted, albeit reluctantly, the fact that North Korea is now a nuclear state and shares North Korea's goal of undermining the U.S.-ROK alliance.China regards North Korea as a “buffer zone” and refers to their relations as “lips and teeth.” Dr. Sung notes China strives to maintain its economic leverage over North Korea and use North Korea’s geostrategic position as a buffer against the U.S. Under such context, it will be difficult to find a breakthrough in the denuclearization negotiation process. Dr. Easley views that the U.S.-China rivalry is not the main obstacle to denuclearization talks; he instead sees that the Kim regime’s own version of “strategic patience” is the biggest stumbling block above all.

Mr. Revere states that high tensions between the U.S. and China have placed South Korea in a very difficult situation. While Seoul believes that it can balance strong security relations with the U.S. and a robust economic relationship with China, he is skeptical that this is possible. He views that the next South Korean administration “will need to make a decision about Korea’s future, keeping in mind the vital importance of its alliance with the U.S., preserving South Korea’s independence, and the need to find a way to coexist with China.” Dr. Easley states that “Seoul should not give in to Chinese pressure, whether in the form of economic coercion against deployments like THAAD, attempts to shift blame onto U.S. alliance defense exercises, or maritime and airspace security challenges caused by China’s fishery and military expansion.” He underscores that South Korea should not use the great power competition as an excuse for the slow progress its North Korea policy has made. Most importantly, he states that the competition should not prevent South Korea from defending its own national interests and sovereignty. ■

■ Leif-Eric Easley_ is a Professor at Ewha Womans University where he teaches international security and political economics. He publishes in academic journals regarding U.S.-ROK-Japan trilateral coordination on engaging China and North Korea. He has degrees from UCLA and Harvard and is frequently quoted in the New York Times, Washington Post and elsewhere on diplomacy in Asia.

■ Ki-Young Sung_ is a director of the department of foreign policy strategy research, the Institute for National Security Strategy (INSS). Dr. Sung’s main research area covers US-DPRK relations, inter-Korean relations and regional coopeartion of Northeast Asia. He received Ph.D. in international studies from University of Warwick (UK), and conducted postdoctoral research at the Korean Studies Institute in University of Southern California. After he had come back to South Korea, he worked for the Yonsei Institute for North Korea, and Korea Institute for National Unification as a research fellow.

■ Evans J.R. Revere_ is senior advisor with the Albright Stonebridge Group, a leading global strategy firm. He is also nonresident senior fellow at the Brookings Institution’s Center for East Asia Policy Studies. He is an active participant in international dialogues dealing with U.S. relations with the PRC, the two Koreas, Japan, Taiwan and East Asian regional security issues. His commentary appears frequently in major U.S., Korean, and Japanese newspapers and he has appeared on CNN, MSNBC, CNBC, the BBC, NHK, and other major international news networks.

■ Chaesung Chun_ is the chair of the National Security Research Center at the East Asia Institute, and a professor of the department of political science and International relations at Seoul National University. He received his PhD in international relations at Northwestern University in the United States, and serves on the policy advisory committee to the South Korean Ministry of Foreign Affairs and Ministry of Unification. His main research interests include international political theory, the ROK-US alliance, and Korean Peninsular affairs.

China’s Stance on the End-of-War Declaration