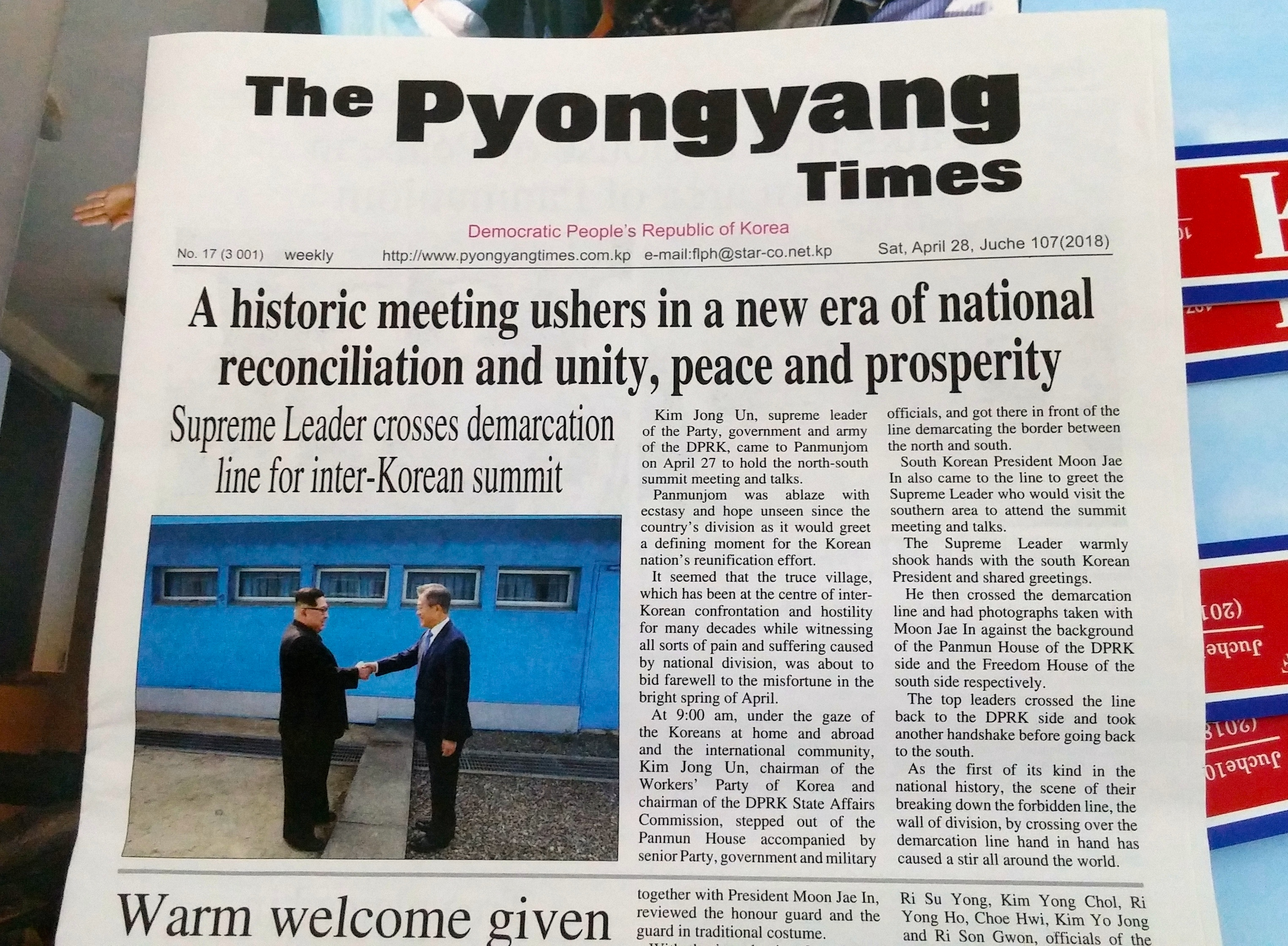 In this month’s NK Update, Yong-Shin Cho, Ph.D. candidate in the Department of Economics at Seoul National University writes on the end-of-war declaration and missile tests. Upon President Moon’s call for an end-of-war declaration in his UN speech, the North has continued to enhance its defense capabilities among neighboring powers are intensifying. Kim Jong Un explained that the missile test is part of its plans to attain the main goal of the five-year plan for the development of the national defense science and weapons system. While the Kim regime states that South Korea is not the main enemy notwithstanding series of missile launches, South Korea and U.S officials continue to express concern on the situation in the Korean Peninsula.

In October, North Korea continued military provocations launching series of missiles. North Korean authorities announced on Friday, October 1st that they have tested anti-aircraft missile the day before, two days after the test of its new hypersonic missile. They stated that they “conducted a test launch on September 30th with the aim of confirming the operational practicality of the launcher, radar, and comprehensive battle command vehicle along with confirming its comprehensive battle combat performance of the [newly developed] anti-aircraft missiles.” The test was reportedly conducted under the supervision of Pak Jong-chon, a member of the Presidium of the Politburo of the ruling Workers’ Party along with numerous defense and science officials. Kim Jong-Un however, did not attend. In response, Cha Deok-Cheol, deputy spokesperson at the Unification Ministry said, “We will continue our efforts to ensure that the situation on the Korean Peninsula is stably maintained through the restoration of inter-Korean communication lines and the resumption of dialogue.”

On Wednesday October 20th, North Korean state media once again argued that the test launch of a new ballistic missile from a submarine was successful. They have made similar claims back in 2016; this was disputed by both the international and South Korean analysts. The Korean Central News Agency (KCNA), reported Wednesday that the Academy of National Defense Science has tested “new type” submarine-launched ballistic missile (SLBM) on Tuesday of the same week from “8.24 Youngung ship”. The North Korean state media released photos of the missile launch from a 2000-ton submarine marked “824” which appears to be the same one that supposedly launched the SLBM in 2016. The SLBM test was the first one since October 2019, which was suspected to have been launched from an underwater launch platform. The KCNA also reported that the SLBM had “lots of advanced control guidance technologies including flank mobility and gliding skip mobility” and “will greatly contribute to putting the defense technology of the country on a high level and to enhancing underwater operational capability of our navy.” According to the source, the test was overseen by Yu Jin, department director of the Central Committee of the Workers’ Party and Kim Jong Sik, vice department director of the Munitions Industry of the Central Committee and officials of the defense academy. It appears that Kim Jong Un was absent at the launch site. North Korea’s SLBM launch on this day was its highest-profile weapons test since U.S. President Joe Biden took office in January and the launch was executed on the same day as the closed-door trilateral meeting of South Korean, U.S., and Japanese intelligence officials in Seoul.

In response, the Blue House immediately called a meeting of the National Security Council (NSC) chaired by Suh Hoon, the director of the National Security Office. The NSC expressed “deep regret that North Korea’s launch occurred while active consultations are under way with the U.S., China, Japan, Russia, and other key countries to advance the Korean Peninsula peace process.” The members “reaffirmed that stability on the Korean Peninsula is more important than ever” urging North Korea to “come forward for dialogue for peace on the Korean Peninsula at an early date.” The White House has “condemned” the North’s ballistic missile launch and argued that it violates UN Security Council resolutions. White House press secretary Jen Psaki said, “We call on the DPRK to refrain from further provocations and engage in sustained and substantive dialogue” in a White House press briefing on Tuesday, but also said “These launches also underscore the urgent need for dialogue and diplomacy.” She added “Our offer remains to meet anywhere, anytime, without preconditions.”

According to the state media on October 12th, Kim Jong Un said that the South Korea is not the regime’s “main enemy” notwithstanding series of missile launches. This rather unusual comment was made at a showcase of the country’s most advanced military hardware. At the Defense Development Exhibition held at the Three Revolution Exhibition Hall in Pyongyang, Kim also argued that the country “has to become strong” before beginning to evaluate its options with regards to external relations. Kim said, “It is the ultimate goal and unwavering will of the Party that we should possess and continuously develop invincible military power, such that no one can touch us.” referring to the military policy of the North’s ruling Workers’ Party. Kim also said in a speech celebrating the party’s founding anniversary on Sunday that the main purpose of the enhancement of military power is solely for the purpose of war deterrence and that neither South Korea nor the U.S. was the target.

However, Kim claimed that the country’s military empowerment is mainly a deterrent to possible war and blamed the U.S. for existing tensions on the Korean Peninsula. He accused South Korea of its hypocrisy in that it condemns the North for developing weapons, while South Korea itself is also developing its own weapons. He also furthered his argument by adding that “In South Korea, the words ‘provocation’ and ‘threat’ are used exclusively for North Korea.” Kim also expressed his doubts on the new U.S. policy towards the North claiming that “The U.S. has recently frequently signaled that it is not hostile to our country, but there is no behavioral basis to believe that it is not hostile.” The series of comments on the South and the U.S. were intended to point out the “double standards” of the U.S. and South Korea and also to urge the “withdrawal of hostile dialogue policies,” which North Korea has continuously demanded as a requirement for the resumption of dialogue. Analysts assert that Kim’s comments on the South as not being the ‘main enemy’ is likely to be an attempt to persuade the U.S. to withdraw its forces from the Korean Peninsula and lift sanctions against the North.

South Korea and U.S officials continue to express willingness to meet with the North

U.S National Security Adviser Jake Sullivan reiterated that the U.S. holds “no hostile policy” towards the North and it is always ready to engage in negotiations with Pyongyang during a meeting with his South Korean counterpart on October 12th. Suh Hoon, director of Blue House National Security Office, has confirmed the U.S. stance to begin negotiations with North “anytime, anywhere, without preconditions.” Two sides have agreed to continue to work closely to engage North Korea and bring Pyongyang back to the negotiating table, which was currently in a deadlock since 2019. Suh, after the meeting, told reporters that the U.S. “expressed strong support for inter-Korean dialogue to make a breakthrough on the situation in the Korean Peninsula and the COVID-19 pandemic.” He also said that both sides “shard the view that diplomacy and dialogue with North Korea are very important to reduce security threats on the Korean Peninsula and bring economic stability and denuclearization.” Suh leaved the possibility open for future humanitarian support for North Korea, such as COVID-19 vaccine supplies, which may allow for an atmosphere more conducive toward dialogue. The White House NSC said that Suh and Sullivan “held detailed discussions on the current security situation in the region and called on the DPRK to enter into serious and sustained diplomacy towards the complete denuclearization of the Korean Peninsula.” NSC spokesperson Emily Home stated that Sullivan emphasized the need for North Korea “to refrain from escalatory actions” but “reaffirmed U.S. support for inter-Korean dialogue and cooperation” in a statement.

Following the bilateral meeting between the South Korean and U.S. security advisers, the heads of intelligence of Korea, Japan and the U.S. again held a trilateral meeting in Seoul on October 18th just as their nuclear envoys gathered in Washington. National Intelligence Service Director Park Jie-won, U.S. Director of National Intelligence Avril Haines, and Japan’s Cabinet Intelligence Director Hiroaki Takizawa have met for the first time in five months after the meeting in Tokyo back in May. An official from South Korea’s Foreign Ministry said, “The gathering of the South Korea, U.S., and Japanese intelligence chiefs signals that there is an urgent agenda to discuss, and at this meeting, we plan to exchange a wide range of opinions on an approach to North Korea, including dialogue with North Korea, and on North Korea’s nuclear program.”

The top nuclear envoys of South Korea, the U.S., and Japan have expressed “concern” over North Korea’s latest SLBM launch in a meeting in Washington on October 19th. Noh Kyu-duk, South Korean Special Representative for Korean Peninsula Peace and Security Affairs, Sung Kim, the U.S. Special Representative for North Korea, and Funakoshi Takehiro, their Japanese counterpart, discussed the situation on the Korean Peninsula including Pyongyang’s recent SLBM launch. After the meeting, Noh told reporters that “We agreed that maintaining stability in the Korean Peninsula situation is very important” and that “We will continue to closely monitor the situation in the future while staying in close communication and cooperation for the early restarting of the peace process on the Korean Peninsula.” The three nuclear negotiators “reaffirmed their commitment to working trilaterally to reduce tensions and make progress toward the shard goal of the denuclearization of the Korean Peninsula”, said the U.S. State Department in a statement regarding the meeting.■

[Article] The U.S. - Ringleader of Carnage and Genocide)

[Article] Looking back upon the Chronicles of DPRK-PRC Friendship (5)) 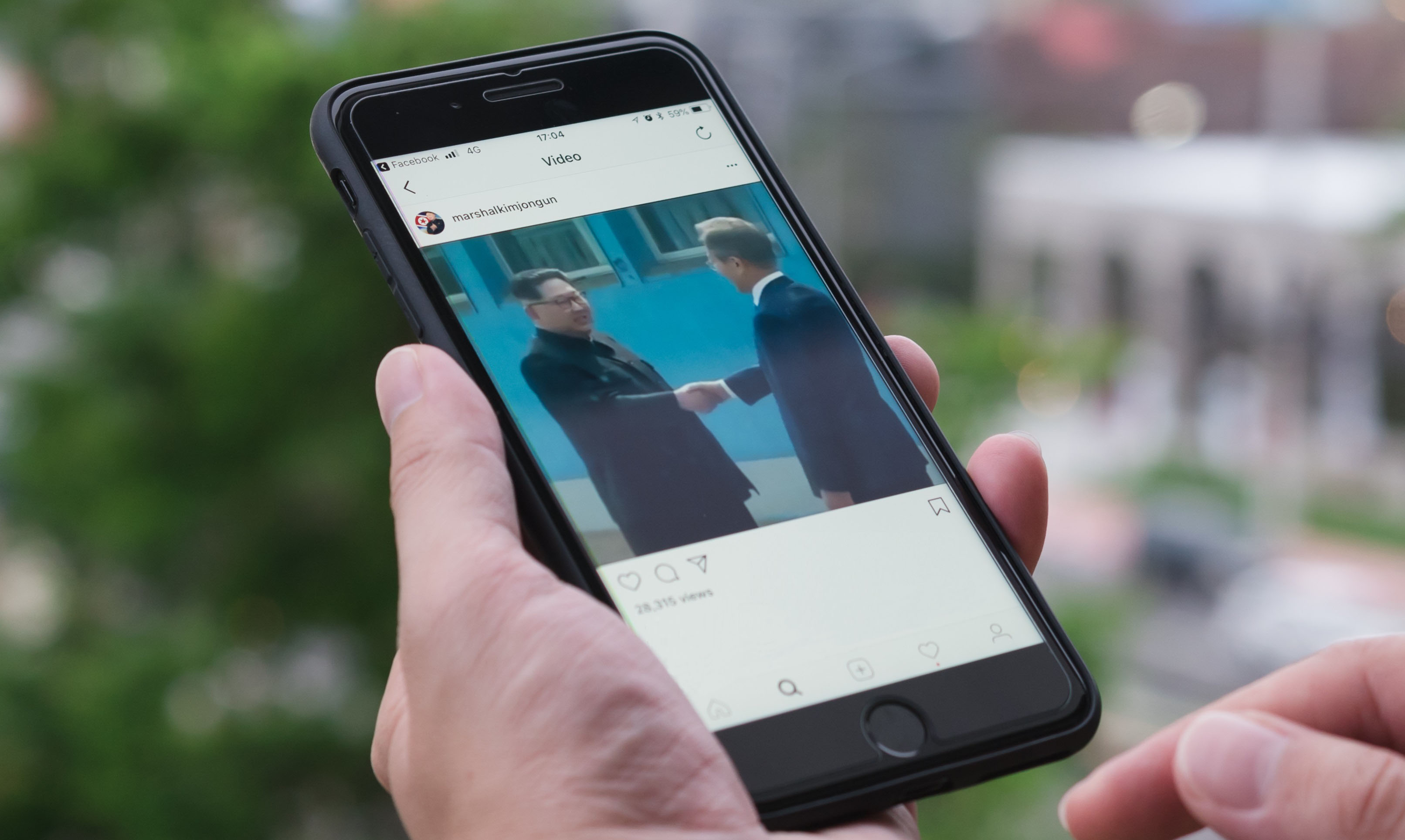 Getting the Price Right: The End of the War Declaration and North Korea’s Missile Tests 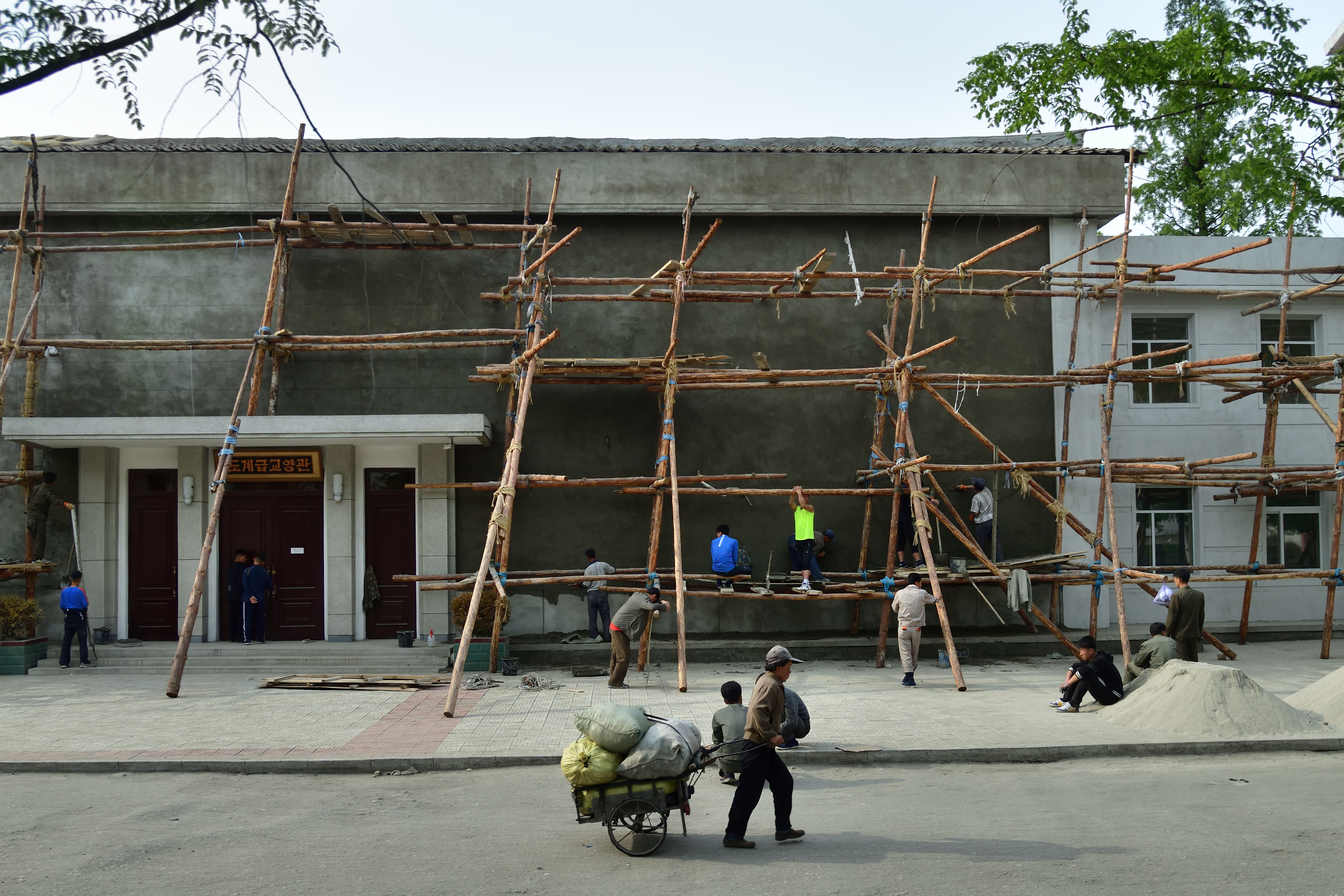 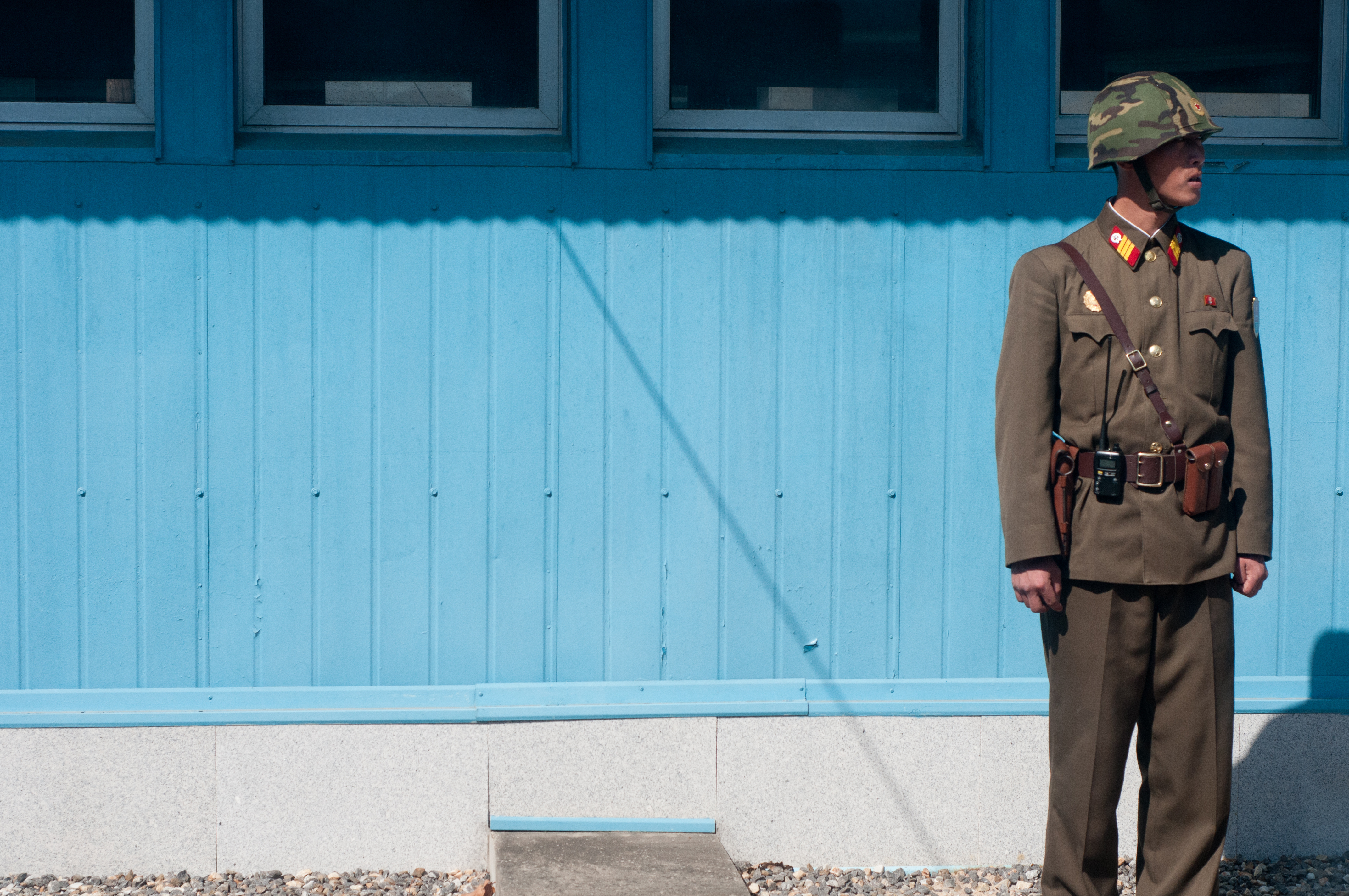